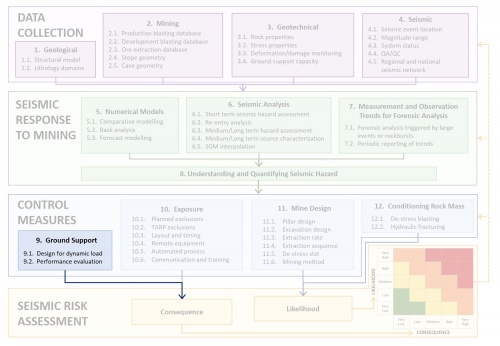 Ground support is often perceived as the main tool to mitigate the consequence of seismicity. Based on a forecast of the largest events in each area of the mines, ground support systems are designed and implemented to contain such events. Despite a large effort by the industry to improving knowledge of dynamic ground support behaviour, the theoretical basis and design methodologies for dynamic ground support remain deficient.

The dynamic support implemented has been incrementally improved in most mines because of retrospective lessons learnt from rockburst damage. The support elements which failed have been replaced by stronger and/or yielding elements.

There are major gaps in current knowledge to enable accurate design calculations for dynamic support. Both the estimation of energy demand from seismic events and the energy capacity of support systems rely on many unverifiable assumptions. Nevertheless, dynamic support design practices are regarded as being advanced practice when a significant effort is spent on quantifying the key demand and capacity parameters for analytical calculations.

Note: As these approaches rely on empirical data, they require an internally consistent database to be reliable on a site for which it was developed and knowledge can only be transferred between sites if the data from the different sites have been shown to be consistent between sites. Data Quality 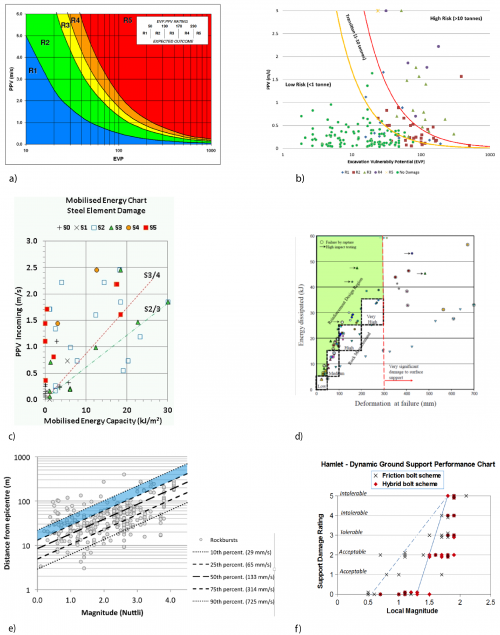 Counter (2017) use such a database collected over many years at Kidd to develop a ground support survivability matrix, as shown in the following figure. This is another example of an advanced practice providing a very useful dynamic ground support selection tool. 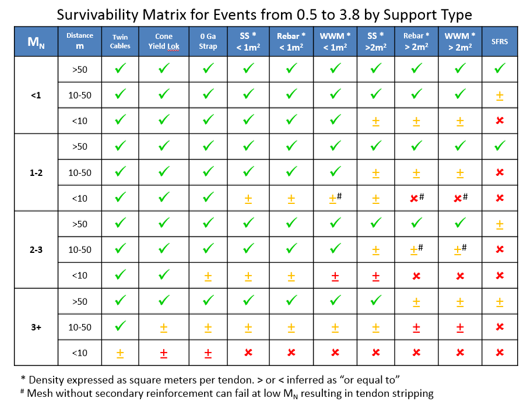 Advanced practice involves the development of a comprehensive and searchable database of rockburst damage where trends are analysed periodically, as shown in the first figure below. The second figure below shows the cumulative tonnage from rockbursts at LaRonde mine. The jumps in the data indicates times where dynamic ground support needs to be re-assessed and improved.

Empirical methods can also be calibrated to site when such a database contains sufficient data. Large events producing no damage should also be recorded as they provide important data on ground support system survivability which is useful for design method calibration. This is currently not common practice. 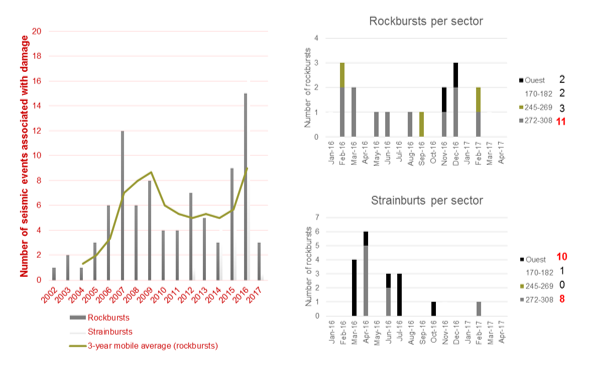 Figure: Rockburst and strainburst statistics since 2002 for the whole mine (left) and rockbursts per sector for 2016 (right) 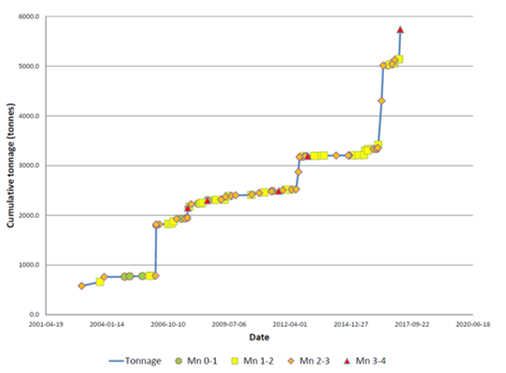 It is noted that advanced practice should involve assessing and rehabilitating ground support if required, after large events, even when there is no fall of ground but there is visible damage. It is an increasingly common practice for mines to use displacement data from before and after Lidar measurements. These measurements are used to estimate the consumed and residual capacity of the ground support and the need for proactive rehabilitation after significant seismic events.

QA/QC is an important parameter in the dynamic capacity of ground support and advanced practice includes a comprehensive and efficient ground support QA/QC system to ensure that the installed capacity remain sufficient for expected demand throughout its functional life.