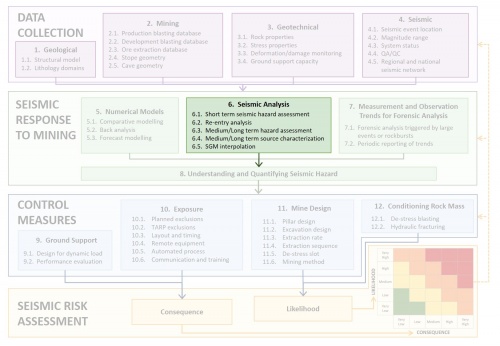 For the analysis of seismic responses after blasts and large events, the standard approaches include the qualitative assessment of a time series chart (e.g. magnitude-time, daily histogram, cumulative event count) and spatial plot of seismicity (e.g. plan view, 3D view). This style of analysis is done on the vast majority of sites irrespective whether more advanced approaches are also considered. The following figure provides an example of a seismic response to a large event. Spatial plot is shown left and an annotated time series is shown right (Vallejos and McKinnon 2010).

Figure: A spatial plot a) and cumulative event count time series b) for a seismic response to a large seismic event (Vallejos and McKinnon 2010)

Additionally, the time of day of events is commonly used to evaluate to what degree seismicity is related to blasting; specifically, to estimate the rate of seismicity that occurs independent of blasting (background rate). The figure below provides an example of a diurnal chart (Vallejos and McKinnon 2010). 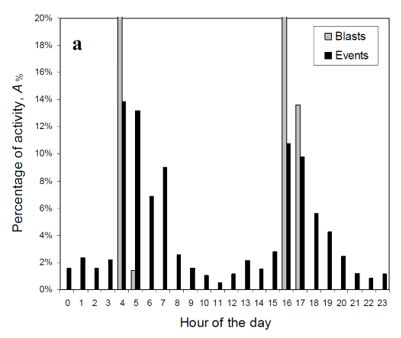 Advanced analysis of seismic responses incorporates seismic source parameters into the assessment and/or aims to quantify the space-time characteristics of a response. Temporal assessment of seismic responses can incorporate the location of events by defining an analysis volume. These are arbitrary volumes often defined by coordinates, as shown in the following figure, or by only considering events within a certain distance from a blast.

Figure: Spatial volumes (green frames/polygons) are defined with respect to mine surveys a) or elipsoids around blast locations b) to intoduce a spatial component to temporal analysis

The most common method of incorporating seismic source parameters is to consider a rate or accumulation of a parameter value over time.

Advanced analysis also aims to quantify seismic responses by fitting a temporal model to event occurrence. This model is most commonly the Modified Omori Law (MOL) which was derived from the study of earthquake aftershocks (Omori 1894); for example, the following figure shows the MOL which models five responses to blasting (Plenkers et al. 2010). Temporal modelling approaches incorporate the location of events by either considering arbitrary areas of a mine, volumes around blasts, clusters determined visually, or clustered determined by an algorithm. 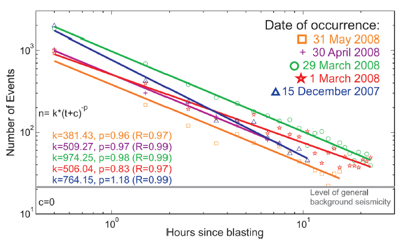 Figure: Application of the MOL to seismic responses following blasting. Seismic event rate is plotted with respect to the fitted model and background rate of seismicity (Plenkers et al. 2010)

Time series analysis aims at detecting anomalous seismic behaviour as a precursor to elevated seismic hazard. These types of assessments are often used in conjunction with each other. One of the most common approaches is to examine energy-index and cumulative apparent volume, Schmidt Number and extraction induced seismic strain, over time, as shown in the following two figures. Other approaches include cumulative energy, apparent stress time history, ratio of S-wave energy to P-wave energy, static stress drop, and dynamic stress drop. 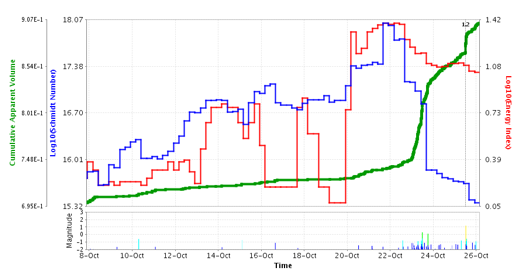 Figure: Time history of CAV, EI and Scs for about one month before a m 1.2 at a deep gold mine in South Africa (Rebuli and van Aswegen 2013) 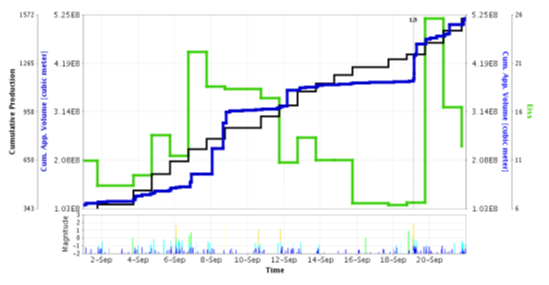 Figure: Time history of CAV, cumulative production and EISSr for about one month before a m 1.9. EISSr shows a steady drop a few days before the m 1.9 event (Rebuli and van Aswegen 2013)

The topic of re-entry is covered in two sections. This section focuses on the analysis of data following blasts and large events and the derivation of rules. The application of these rules and real-time monitoring of seismicity and re-entry decisions is discussed under the Control section (10.1.2). For many sites, re-entry protocols are not based on back analysis of seismicity, but rather on choosing conservative re-entry periods. Some sites with enough flexibility in the mining schedule allow long periods before re-entry by sheduling work to be performed in areas further away from recent blasts.

Re-entry analysis uses short-term assessment techniques to characterise current and/or historical seismic responses. Blanket exclusion rules are developed from historical responses and consider practical operational constraints. These rules are typically conservative by design and use the assessment of a current seismic response to refined exclusions. Cumulative event count: count of the events that occur within a fixed analysis period (e.g. six hours after) and distance (e.g. 50 m) from blast. Re-entry protocol length is based on an arbitrary event percentage for historical responses; for example, protocols are lifted when 90% of events occurred for historical responses.

Seismic event rate – Return to background: re-entry protocols are lifted when the rate of seismicity returns to a previously determined background rate. This is evaluated in several ways ranging from qualitative assessment (e.g. when the slope of cumulative events looks similar to that prior to the blast) to quantitative assessment. IMS STAT is an example where such analysis is performed in real time and translated to a traffic light system for real-time assessment for re-entry times.

Seismic hazard over the longer term is generally reported using simple statistics. Weekly and monthly reports usually include the total number of events recorded, as well as the number of large/significant events. Sometimes the event count over the previous reporting periods is included for reference.

The cumulative number of events is usually used to assess changes in seismic activity rate over time; higher gradients generally representing periods of elevated hazard. The areas within the mine with elevated hazard are often evaluated with event density plots. Event density isosurfaces, as demonstrated in the figure below, are plotted based on an event count within a certain radius. Sometimes a threshold event magnitude is applied to the event count to reduce the effect of varying seismic system sensitivity across the mine. 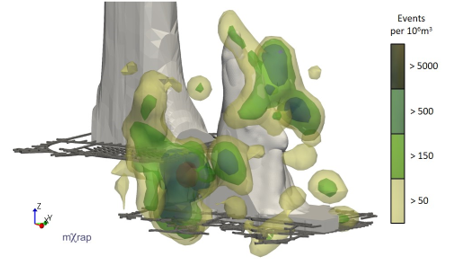 The following figure is a frequency-magnitude chart and is used to quantify and visualise the size distribution of events. Many operations use the magnitude where the Gutenberg–Richter relationship at N = 1 (sometimes referred to as the a/b value) as an estimate of medium/long term hazard although in some cases there might not be a sufficient appreciation of the importance of accounting for scale effects in both space and time. 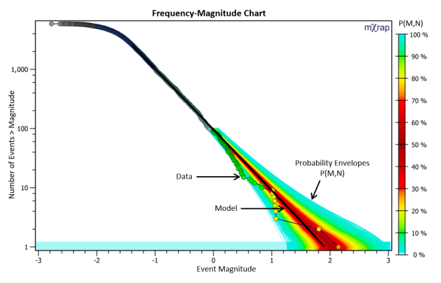 Although the investigation into pre-cursors to earthquakes and mining-induced seismic events are continuing, it is well recognised that meaningful predictions of large seismic events are not currently possible. Given the inherent variability and uncertainty of mine seismicity, results from advanced seismic hazard assessments are often probabilistic (see figure below).

Some form of probabilistic seismic hazard (PSHA) is now increasingly used in the industry with 87% of online survey responders saying they have used the grid-based PSHA as shown in the following figure within the last 12 months. The grid-based hazard assessment quantifies the current hazard state based on the recent historical data. Seismic hazard is calculated probabilistically and expressed as hazard ratings and as probabilistic hazard maps. 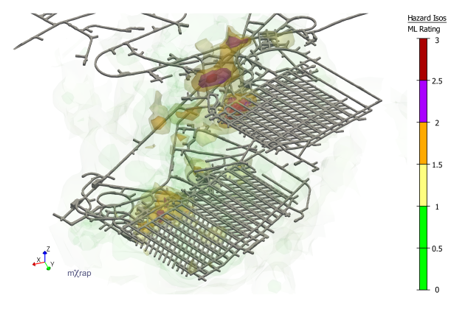 The seismic hazard for mine development is often expressed as the probability of exceeding a design peak particle velocity (PPV) within a defined time period. The estimation of seismic hazard in terms of PPV requires a site ground motion prediction equation (GMPE) to calculate the magnitude of the ground motion based on the distance and seismic event source parameters, as demonstrated in the figure below. 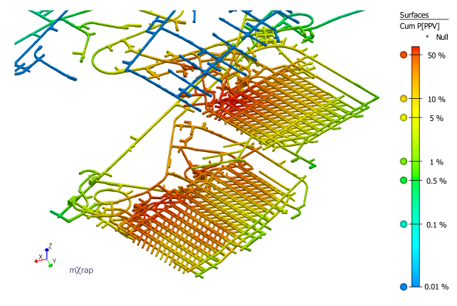 The PPV map in the above figure uses the grid-based results to perform the probabilistic evaluation of PPV’s on the development. This approach estimates the current seismic hazard based on recently recorded data. The Peak Ground Velocity (PGV) map (note that PPV and PGV is the same) in the below figure incorporates modelling information to estimate ground motions for the future mining geometry. 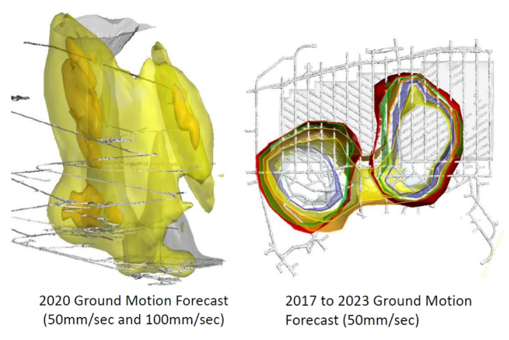 It is important for the site geotechnical team to form an appreciation of the different sources of seismicity in the mine, their characteristics and their likely responses to mining activity. This appreciation is obtained through back analysis and detailed investigation into the recorded seismic and non-seismic data, interpreting different source parameters within the context of mining. In spite of its importance, this is not commonly done.

Methods used for medium/long term characterisation of seismic sources analyse seismic data in order to gain insight into the rock mass response to mining; either causation or mechanism of rock mass deformation. The use of moment tensor solutions is becoming more common but, based on the survey conducted, this is only done on an event-by-event basis. Generally, the fault plane of the moment tensor solution is compared with nearby geological orientations. It is less common for operations to use the moment tensor decomposition.

Volume/Polygon-based assessments of source parameters are sometimes performed to quantify the rock mass behaviour in a specified volume. The evaluation of Energy index (EI) and Apparent stress is often used as an indicator of stress, cumulative apparent volume, or the cube root of moment as an indicator of co-seismic rock mass strain and b-value as an indicator of fracture mechanism.

Grid-based analysis is becoming more popular as a seismic analysis tool and is being used by 87% of survey responders. The grid-based approach does not rely on user-chosen analysis volumes and is free of bias due to user-decision on volume selection. It still requires user input, so it is not free of user influence. 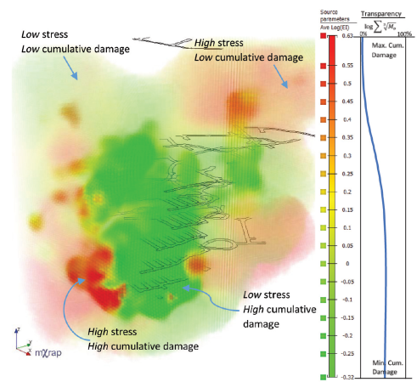 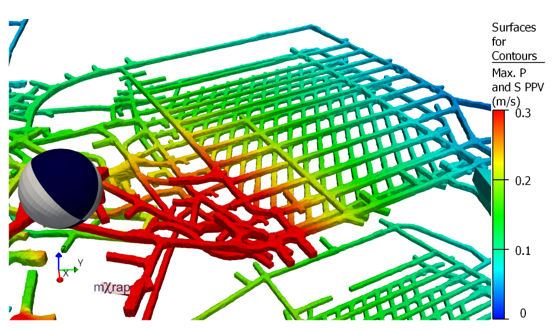