It is possible to reduce seismic hazard by modifying the rock mass properties using pre-conditioning techniques such as blasting or hydraulic fracturing to change its seismic response to mining-induced stress changes. This can be done at the scale of a drive, or at the very large scale of a block or panel cave mine. Codelco El Teniente Division is a clear leader in this area.

Although it has been applied occasionally at the scale of open stoping, de-stress blasting is more commonly applied at the scale of a drive by choke-blasting the walls and back ahead of the face. The standard approach relies on a trial and error process to design the blasts and is used as an ad hoc process when the risk of strainburst is elevated, hindering the progress of development mining.

There is no standard approach to hydraulic fracturing for pre-conditioning purpose.

El Teniente mine has been using hydraulic fracturing for pre-conditioning for almost 15 years and are currently applying this technique systematically throughout their operation to reduce seismic hazard. This is the only mine in the world using this technique for mitigating seismic hazard and they have shown strong evidence that it has contributed in reducing the overall magnitudes of seismic events. The following figure shows an example of a hydraulic fracturing of a mine drive at El Teniente mine (Rojas and Landeros 2017). 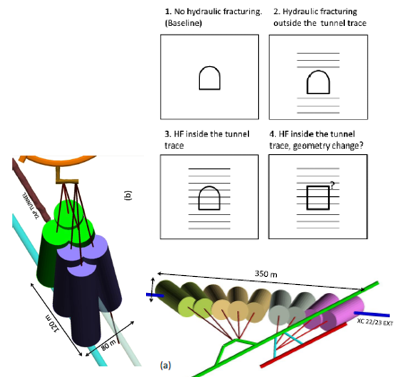 Figure: Illustration of hydraulic fracturing of a tunnel at El Teniente mine (Rojas and Landeros 2017)