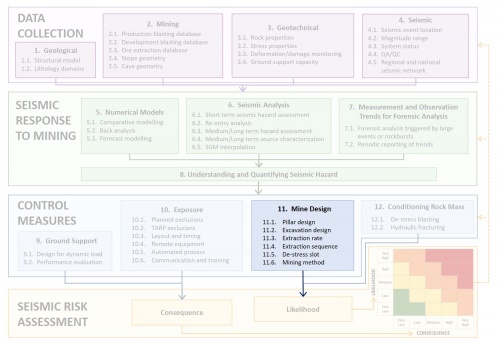 Where mining methods requires pillars to be left, such pillars are generally designed to prevent them from becoming a source of high seismic hazard. Pillars are often designed to fail to mitigate against possible pillar bursting. The avoidance of diminishing pillars is common practice. For economic reasons, low grade pillars are sometimes left unmined. Such pillars are likely to become a source of seismic risk and a decision to recover them is sometimes made to mitigate seismic risks, in spite of the economic burden.

Pillars which do not perform as designed may become sources of seismic hazard. It may be important to establish early on whether a pillar is performing according to design to allow for any remedial action. In such a case, dedicated seismic and non-seismic monitoring of the pillar performance is necessary. Dedicated seismic monitoring includes the design of the seismic array with a greater sensitivity in the volume surrounding the pillar and regular evaluation and interpretation of the seismic and non-seismic instrumentation data.

Dedicated monitoring programs to establish whether pillars are performing according to design is not generally performed.

Excavation design is often influenced by consideration of seismic hazard. This includes, for example, changes in layout to avoid high hazard areas for important infrastructure. Avoidance of excessive spans is common practice; for example, the reduction of intersection spans by avoiding four-way intersections in favour of three-way intersections.

Design changes in excavation shape to control seismic risk may result in significant improvement. Changing the profile of the development from square to a horseshoe shape may result in a more stable rock mass in the roof with an excavation less vulnerable to dynamic loading. Such a change may also reduce the consequence of a rockburst. The same principle applies to larger excavations where the stope shape may be optimised to reduce vulnerability to dynamic loading and reduce the consequence of a seismic-induced failure.

Some operations align excavations with respect to the stress orientation and the orientations of geological features to limit excavation vulnerability.

Extraction rate is not regarded as a “standard” control measure.

Some have argued that lower production rates will lead to lower seismic hazard due to the rock mass being allowed to relax after excitation caused by the mining activity. Current literature provides limited support for this notion.

The design of extraction sequence is commonly used as a seismic risk control measure with geotechnical engineers providing mine planning with design rules and performing reviews of proposed mine plans. The extraction sequence is adjusted to manage the mining-induced stress change by, for example, maintaining a favourable angle between the mining front and the principal stress orientation or by minimising unfavourable stress conditions.

The risk associated with seismically-active structures is often mitigated through consideration of the extraction sequence. For example, it is common to mine away from, rather than towards, an active structure and to design the sequence to minimise mining-induced shear stress on the structures. These principles are often applied by rule-of-thumb.

Advanced practice with respect to the design of the extraction sequence includes the comparison of competing alternatives with numerical modelling methods to quantitatively evaluate different options.

Mining of a de-stress slot is not regarded as a “standard” control measure.

De-stress slots are sometimes included as part of the mining method and schedule where the de-stress slot is mined in the ore. Mining of waste rock for the sole purpose of creating a stress shadow for mining ore in a lower stress environment is generally not performed.

Mikula et al (2005) and Kempin et al. (2007) describe the successful implementation and routine use of a “Tight slot blasting”. TSB uses a cushion of broken blasted rock to act as a shock absorber, and impede the ability of a fault-slip movement to sharply accelerate and decelerate. Slip velocities and distances are lower, meaning that energy released is also lower.

Generally the mining method is decided during the feasibility study and is not changed. Some consideration may be given to seismicity, but decisions are generally dominated by economic considerations.

Mining method changes are generally not considered as a seismic risk control measure. Change in the mining method is generally limited to extreme cases where continuation of the original mining method cannot be justified. One example is the change in the mining method at the Tasmania Mine in Beaconsfield after mining was halted following the seismic event fatality in 2006 (Hills et al. 2008). Another example is the South African deep level mining industry changing from longwall mining to sequential grid mining with subsequent improvement in the seismicity at the mines.