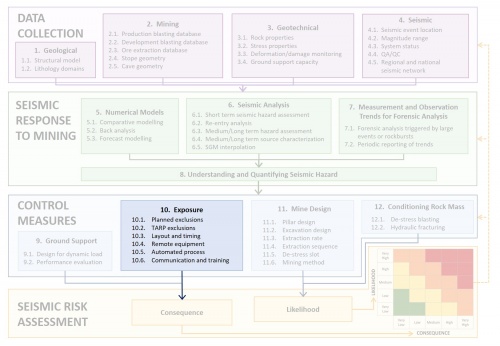 Seismic hazard is elevated following abrupt stress changes which result in periods of increased seismicity which cluster in space with the activity rate decaying over time (seismic response). These responses can be highly variable in nature and their influencing factors are not well understood. Seismic responses routinely occur following blasting and large seismic events. The vast majority of seismically-active mines aim to limit exposure during periods of heightened seismicity to reduce risk (re-entry protocols). The focus of seismic response analysis is driven by re-entry protocols which aim to reduce risk due to seismic response as much as practically possible within the context of site-specific production and economics.

The most standard approach to planned exclusions are used by sites with relatively unambiguous seismic responses; that is, responses characterised by low seismic hazard, immediately after and close to blasting, and strongly clustered in space and time.

Exclusions are developed from site experience and qualitative analysis of time series and spatial plots. These exclusions are often fixed, blanket-style rules that are limited by operational considerations; for example, limiting access within 100 m of fired stope for a shift (12 hours). Blanket rules may be different based on geotechnical domains, type of blast, etc. Site experience and geotechnical judgement is relied on to extend or shorten these exclusion rules. The effectiveness of re-entry protocols in reducing seismic risk is not assessed.

High seismic hazard responses may require increased spatial and temporal exclusions, but may have broader implications for mining operations. These include the management of future mining sequences that may result in similar seismic responses, planning of operations to account for longer re-entry restrictions, and optimising ground support requirements. Sites with complex and/or high seismic hazard responses aim to develop an understanding of the underlying rock mass failure processes and/or quantify seismic responses to inform the planned exclusions.

Sites using advanced methodologies will have blanket rules as guidelines which may be refined or extended based on subsequent assessment. Site experience and geotechnical judgement still play a large role in aspects such as:

Historical responses are routinely reviewed to ensure current applicability of advanced exclusions (e.g. every six months). This assessment will usually determine currently applicable blanket rules for a set of conditions. IMS STAT performs real time assessment of re-entry times and considers background and current rates of events within a volume (converted to Traffic Light States, figure below). This plot also includes cumulative event count and potency over time (left axis) and the event distance from a reference point (right axis). 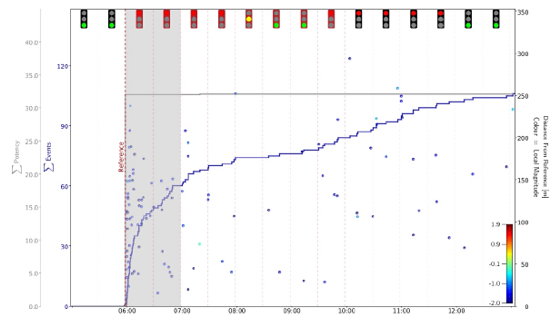 Vallejos and McKinnon (2010) proposed a real-time re-entry decision method that is not commonly used. These measures along with the current response and historical background rates are considered in a time series. Exclusion enforcements are lifted once the current response meet criteria with respect to the isoprobability curves, time of maximum curvature, and background rates of seismicity. The following figure shows an example of this style of re-entry assessment following a large seismic event. 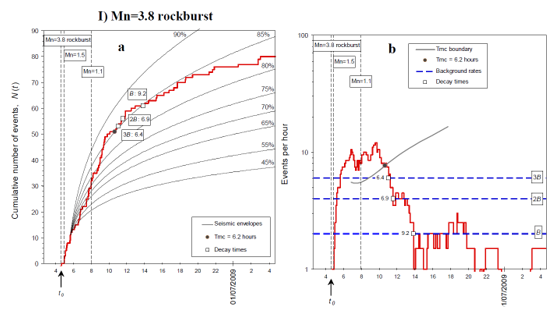 Trigger Action Response Plan (TARP) exclusions can be triggered when underground operators feel or hear anomalous seismicity. What is regarded as anomalous varies greatly based on the site, but can be a large event or many smaller events (cracking, popping, etc.).

The response level of the TARP enacted is proportional to the perceived hazard level; for example, report noise but continue work, operators withdrawing from the work area, evacuating to refuge chambers, mine wide evacuation. In the case of underground observations, the decision about the response level of the TARP to be enacted is often left to the discretion of the shift boss.

The perceived hazard dictates the level of geotechnical engineer input such as reviewing of any seismicity recorded and advising on further exclusions. Exclusions are similar to blanket rules which are enforced following blasting and can be extended or shortened based on the geotechnical review. The methods of assessing the seismic response are the same as for post-blast responses.

TARPs will often include provision for damage inspection which is typically conducted by a shift boss or geotechnical engineer following the detection of a large event.

In many cases, the trigger of the response plan is informal and left to subjective decision-making by the work force. At many mines where the rules are formalised these rules are not derived from historical data. Exceeding a Peak Ground Velocity (PGV) thresholds at sensors may also be used as a TARP exclusion. TARP exclusions are also triggered when seismic monitoring detects large seismic events and/or event rates which surpass pre-set thresholds.

Advanced practices have formalised the triggers for the TARP and quantify these based on historical data. Although it is recognised that back-analysis should be performed to statistically quantify the reliability of the TARP rules and update these accordingly, such back-analysis is not commonly performed.

Mining layout and timing is used as a seismic risk control measure and is generally only considered for tactical, short term decisions (e.g. per stope basis). This takes the form of a geotechnical review of factors that may influence short-term exposure, including previous performance of stopes, historical seismicity and stand-off to unfavourable geology/structures. A standard geotechnical review will have little influence on the layout and timing of future mine activities.

In adition to short term reviews, advanced use of mining layout and timing control measures will be integrated into medium- to long-term planning processes. Longer term geotechnical reviews will also be conducted and influence future mining (e.g. yearly review).

A review of anticipated geotechnical and seismic conditions may influence aspects such as excavation layout with respect to structures, orebody access, pillar dimensions, bogging strategy (in caving mines) and overall stoping sequence.

Standard practice for remote equipment is to switch to remote bogging if an area is seismically-active. The switch to available remote bogging is at the discretion of the geotechnical engineer; although, this may be limited by practical constraints.

The use of remote equipment can have a significant detrimental impact on productivity. Advanced practice is to place a greater emphasis on remote bogging in seismically hazardous conditions (e.g. a stope is seismically active). While less common, remote drilling, bolting and/or charging equipment may be also used.

The implementation of remote equipment during the development cycle tends to focus on reducing exposure to strain bursting driven by local conditions, rather than remotely triggered falls of ground.

Automated processes are not regarded as a “standard” control measure.

Standard practice in communication is the generation of routine reports on seismicity. These reports tend to summarise the seismicity that occurred with limited interpretation and usually take the form of summary tables, time series and 2D/3D spatial plots. Large events are often highlighted.

Standard practice in training is limited to standard underground inductions and training.

Advanced practice in communication includes the generation of routine reports on seismicity and their source mechanisms with respect to mining activities and geotechnical factors. These reports are actively communicated to the workforce at all levels and focus on providing context for different safety and production decisions.

Ad hoc communication may be used for notable large events and/or damage. These are reports that capture the geotechnical and operational context for these occurrences.

Advanced practice in training is for the workplace to receive ground awareness and seismic training which has been tailored for all levels of the organisation. The El Teniente mine, for example, displays seismic risk matrices in the office/meeting areas underground to inform mine workers of the status of the seismic risk at their workplaces.