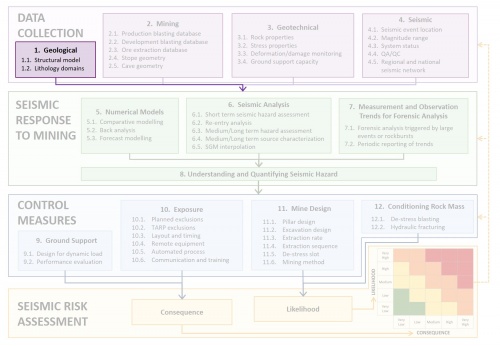 The spatial variation of seismic hazard in most mines is often linked with geology; either geological structures or the nature of the geological units. This makes the collection and verification of geological data important for investigating seismic source mechanisms and anticipating the response to mining in new areas.

Modelled structures are generally kept in a 3D wireframe format that can be used in the relevant mining and seismic analysis software. This often does not include small to medium scale structures below 100 m in extent.

As mining progresses, it is common for structures to be extrapolated beyond the extent of the original interpretation. Often, new development areas are expected to intersect major structures, but the anticipated conditions are not observed. This leads to uncertainty in the reliability of the structural model.

Mining operations with advanced structural geology practices emphasise data collection, interpretation and validation as a core focus of the geology department. Geotechnical engineers have competence in geology and are intimately familiar with the nature and response of each structure in the database.

Aside from structural mapping, some operations use seismic data to interpret unmapped structures. This does require dense 3D seismic arrays, since some less accurate arrays commonly result in linear and/or planar system artefacts that can be falsely interpreted as geological structures. Structural interpretations from seismic data may also be used to increase the extent of mapped structures or to better understand their response to mining. It is important that the seismically interpreted structural information in the database is:

•    identifiable and distinct from physically mapped structures to reflect the relative uncertainty; and
•    reviewed/approved by geologists.

When relevant, the structural model also includes minor and intermediate scale structures that may only be operative in drive scale mechanisms. Smaller scale structures are not modelled explicitly, but the key characteristics are logged and recorded such as dip, dip direction and persistence. This is important for input into various stability assessments and advanced numerical models. Models that utilise discrete fracture networks (DFNs, figure below) are normally generated from the structural database according to the distributions of mapped orientations and extents. Digital photogrammetry, as shown in the figure below, is used at many operations to facilitate the mapping of drive scale structures. This is especially useful for operations where in-cycle fibre-reinforced shotcrete is extensively used.

The definition of geotechnical domains is often guided by the lithology model developed by the geology department, although some lithology units may be combined into a single domain or sub-divided by faults. The level of detail in the lithology model is dependent on the density of logged drill core or face mapping, which is normally focussed around the ore zone. There is generally reasonable accuracy in seismically active areas.

A well-defined lithology model uses dense drilling data in all seismically active areas including modelled wireframes of contacts between lithology units. The lithology model is normally built in specialised geological software, but the data is exportable and used along with the mine’s seismic database. This facilitates the assessment of seismic hazard as a function of lithology. For example, the Rosebery mine identified the porphyry unit as a reason for elevated seismic hazard due to the higher stiffness.

An alteration model may also be important as it may affect rock mass stiffness and local seismic response to mining.